California was chosen as a targeted community through the Vocational Rehabilitation Technical Assistance Center: Targeted Communities (VR-TAC-TC) or Project E3. Project E3 partnered with State VR Agencies and local community partners to improve outreach and employment-related services to underserved people with disabilities in this community.

California is the most populous state in the United States. It is regarded as a global trendsetter in both popular culture and politics, and is the origin of the film industry, the hippie counterculture, and the Internet and personal computer. Fifty-eight percent of the state's economy is centered on finance, government, real estate services, technology, and professional, scientific, and technical business services. It has the 6th largest economy in the world and one of the highest disability rates in the nation.

Agriculture is the primary industry in California’s Central Valley. Primary sources of population growth in this region are people migrating from the San Francisco Bay Area seeking lower housing costs, as well as immigration from Asia, Central America, Mexico, Ukraine and the rest of the former Soviet Union. 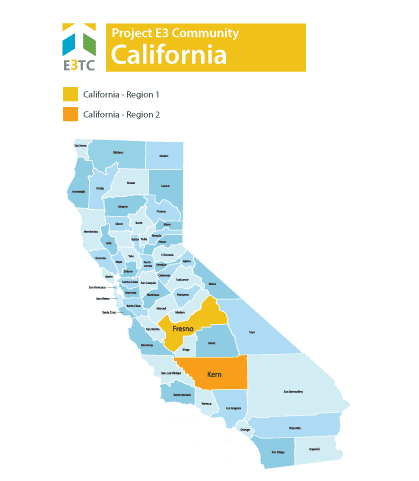 California has the highest cost of living in the United States apart from Hawaii.

Research suggested that both of the targeted populations were at increased risk for experiencing trauma. The effects of trauma can reduce participation in employment-related activities and affect vocational rehabilitation service outcomes.

Project E3 provided California’s state Vocational Rehabilitation agencies and their partners with the skills and competencies needed to effectively and efficiently address barriers to competitive integrated employment and community integration encountered by persons with disabilities in these regions.

We will leverage promising practices, knowledge, and experience gained from this project to expand employment opportunities for individuals with disabilities from underserved and economically disadvantaged populations throughout California and across the United States.

For more information about the California community activities:

Join our conversations
Send us your questions