Louisiana was chosen as a targeted community through the Vocational Rehabilitation Technical Assistance Center: Targeted Communities (VR-TAC-TC) or Project E3. Project E3 partnered with State VR Agencies and local community partners to improve outreach and employment-related services to underserved people with disabilities in this community.

Louisiana is known for its rich diversity of people.  It has more Native American tribes than any other southern state and is home to the descendants of a variety of settlers, including  the French, Spanish, English, German, Acadians, West Indians, Africans, Irish and Italians, and now almost every nationality on earth. There has never been an official language in Louisiana. It is the only state in the U.S. with political subdivisions termed parishes, which are the local government’s equivalent to counties.

Energy, advanced manufacturing, commercial fishing, chemicals, and agriculture are all vital parts of the state’s economy.

The state-federal vocational rehabilitation system in Louisiana faced many challenges as it strove to serve people with significant disabilities and promote competitive integrated employment. Project E3 provided intensive technical assistance to two cities in the Louisiana: 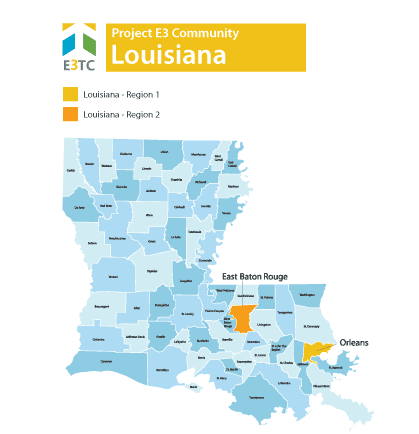 The combination of the challenges above and other factors created significant barriers for persons with disabilities living in Louisiana, including:

Following are some of the key strategies developed and implemented to address the targeted populations’ challenges and barriers to employment.

Project E3 provided Lousiana’s state Vocational Rehabilitation agencies and their partners with the skills and competencies needed to effectively and efficiently address barriers to competitive integrated employment and community integration encountered by persons with disabilities in these regions.

We will leverage promising practices, knowledge, and experience gained from this project to expand employment opportunities for individuals with disabilities from underserved and economically disadvantaged populations throughout Louisiana and across the United States.

For further information about the Louisiana community activities:

Join our conversations
Send us your questions